The B9 variants of the S4/S5 couple and S5 sportback had a newly developed 3-litre V6 with a twin scroll turbocharger which is what we were most impressed by and can also be found in the SQ5 that was in production at the same time. From an aesthetic point of view, the latest generations look much more aggressive than before with more angular body styling and cooler lights. The interior of the B9 generation also looks like it finally deserves to be in an S car as you could now get Audi’s virtual cockpit and other high-end features like cross stitch and massaging seating.

Despite being out for years, it’s taken time for tuners to find a way to get in to the ECU in order to remap it, Revo are one of the few tuners who have been able to get in to the engine management software on the 3.0 TFSI V6 EA839.

With the stage 1 remap, here at Progressive Parts we can take your S4/S5/SQ5 from 349bhp up to an achievable, consistent and, most importantly, safe 410+bhp. Without a doubt a remap on your car will deliver the biggest change in driving experience for you, not only can it deliver up to 20% more power but it’ll change the car in more ways than that – you’ll get better throttle response and a much more enjoyable drive.

Installing an official Revo remap will also remove the top speed limit of 155 miles per hour and keep your engine safe despite the increase in power with cold start and temperature protection. 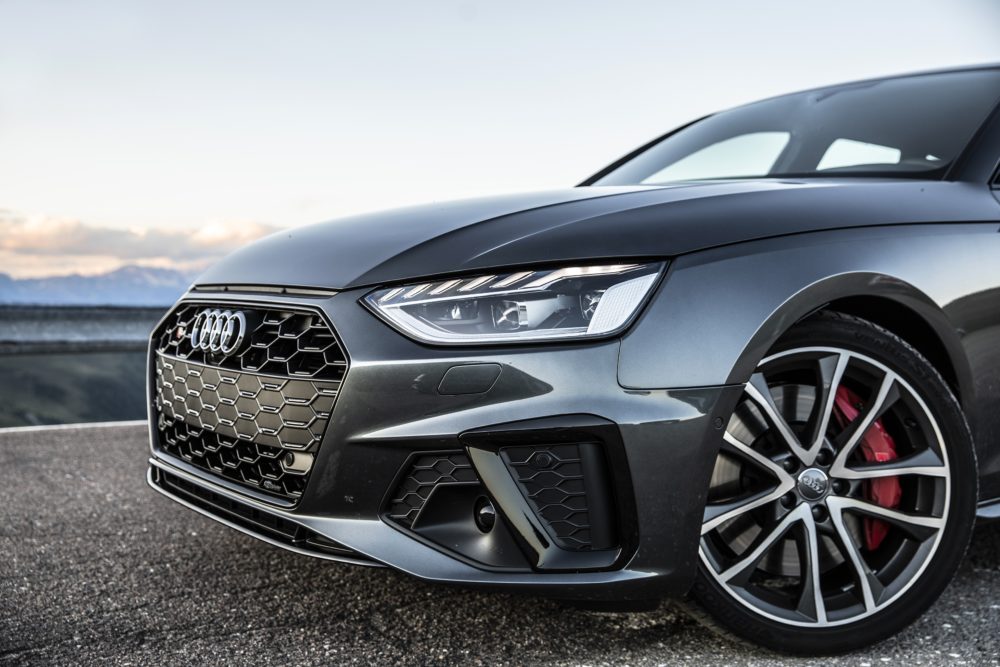 One of the frustrating parts of the B9 is that it’s the year Audi started to put PPF (petrol particulate filters) on their vehicles across the range. Unfortunately, the PPF severely mutes the sound of the exhaust, preventing it from sounding anywhere near as good as it looks and should be. On a stock S5/S4 the exhaust sound isn’t awful, but it certainly doesn’t do it justice.

Milltek has a variety of performance exhaust solutions made for the S4, S5 and SQ5. Whether you’re looking for a loud exhaust, something a bit more exciting with carbon tips or just a bit more personality we’ve got you covered.

If you are looking for a simple increase in volume then the cat replacement pipe could be a good entry point.

The original S5 with its V8 sounded incredible, the second gen downsized to the V6 with forced induction, and now we’re on the third generation the V6 just doesn’t sound anywhere near as good however it does come with better fuel economy and engine response and tax rates – the old V8 is now £600 a year to tax!

Adding an induction kit to your S5/S4 can give your vehicle a small performance boost as stock and can help you take it further in terms of power for your remap as it’ll be able to get more clean air in the engine as the one that came on the stock vehicle can be quite restrictive.

When you’re thinking of go-to mods for the B9 generation of cars, putting an aftermarket intercooler on it might not be one of your first thoughts however the V6 reallly does benefit from installing an aftermarket solution.

The issue with the B9 S4/S5 is that its quite a heavy vehicle, especially in estate or sportback bodystyling and it’s designed more for comfort than dynamic performance. If you want to improve both the stance of your vehicle and the way it handles corners then look to install a pair of lowering springs.

Your S4/S5 comes with incredible aggressive lights and when indicating they’ll be dynamic on the front and rear of the car but not the mirror indicators, adding dynamic indicators will really set off the car whenever you’re looking to make that turn.

The finishing touch after enhancing the performance of your car is to make it look as mean as it is under the bonnet. You’d be surprised how much different a vehicle looks just with a simple aftermarket diffuser attached.

Now that the B9 S4/S5 and the SQ5 have been out for a few years they are starting to become really affordable and make sense as a progression step for those who have had an S3/Golf R/Cupra in the past and have more responsibility or stuff to lug around! With the simple upgrades mentioned above you can absolutely make it your own.