The first Formentor in at Progressive Parts

This week marks the first time we’ve had a Formentor come through the shutters here at Progressive Parts and we’ve already started developing products for the new platform.

What is the Cupra Formentor

The Cupra Formentor is the first original vehicle developed and manufactured by Cupra since it’s split from SEAT. The beauty of the Formentor is that it’s not based on any other VAG product, like the Cupra Leon is based on the regular Leon and the Ateca is the same story.

The Formentor comes with a variety of drivetrains but our favourite is going to be the familiar EA888 2.0litre turbocharged petrol engine rated at 310 PS (306bhp) but excitingly since it’s a crossover it comes with slightly more space than the Leon and has four-wheel drive (4Drive) so it can put the power down.

Since it’s completely new to the market and you likely haven’t seen much of them around we thought we’d point out some highlights and things we’ve noticed on the car.

In our opinion, the Cupra Formentor looks like something completely new on the road, especially when compared to other crossovers. It literally is new, there’s never been anything like it and we think it’s going to have an incredible presence on the road, whilst the bronze tribal badges might be a bit in your face for some we like the overall design.

We like the exterior styling, headlights etc but one thing we would change is the plastic trim around the base of the body, we’d have liked to have seen this be body-coloured, but can understand why they did it. I think if we do look to get a Formentor for the business we might look at wrapping that plastic trim so it matches the body. In terms of wheels, the Formentor comes with a minimum of 18inch alloy wheels but if you go for one of the higher specs it comes with 19s in matte black & silver or machined copper & black, either of which looks mega and we’ve got a pic of each so you can let us know below. 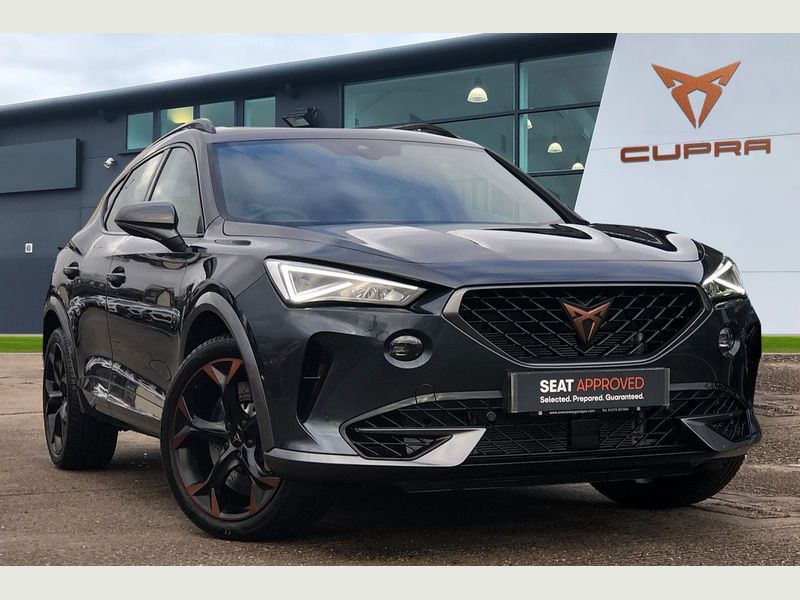 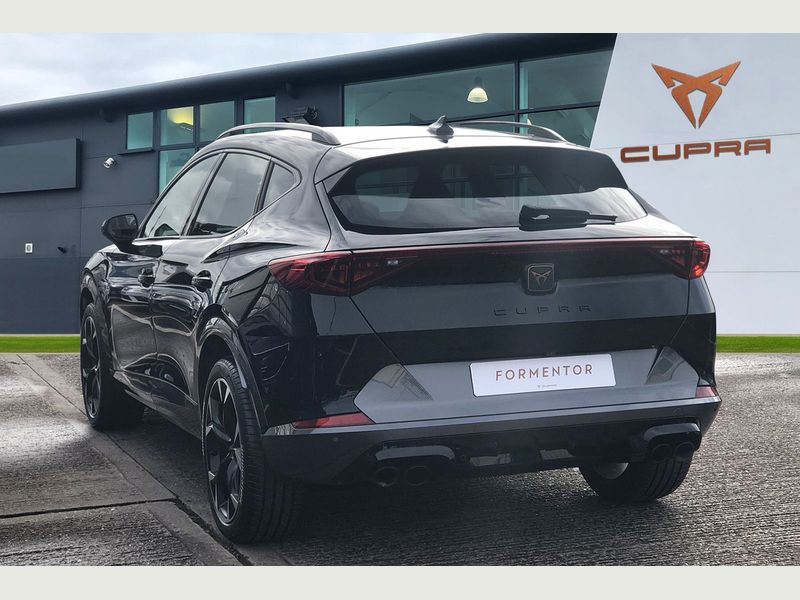 We’re a big fan of the interior, virtual cockpit and a large center touchscreen controls everything, lots of journalists have said its annoyingly as climate controls are via touch, but we’ve not found it that inconvenient.

I think one thing I’ll miss is the gear stick now it’s just a little switch.

One of the unique aspects of the Formentor (which didn’t come on this car) was the petrol blue interior that we’ve seen. If this is combined with a balanced exterior paint it just makes the car look incredible. 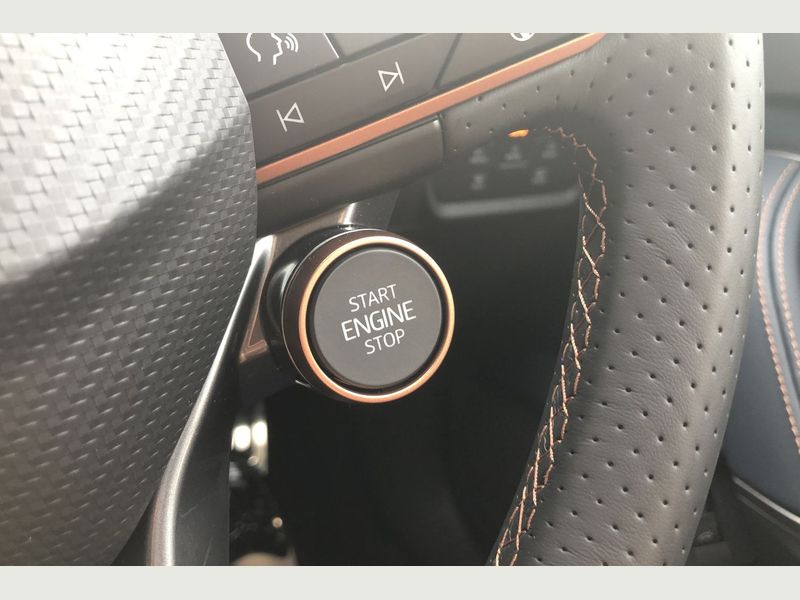 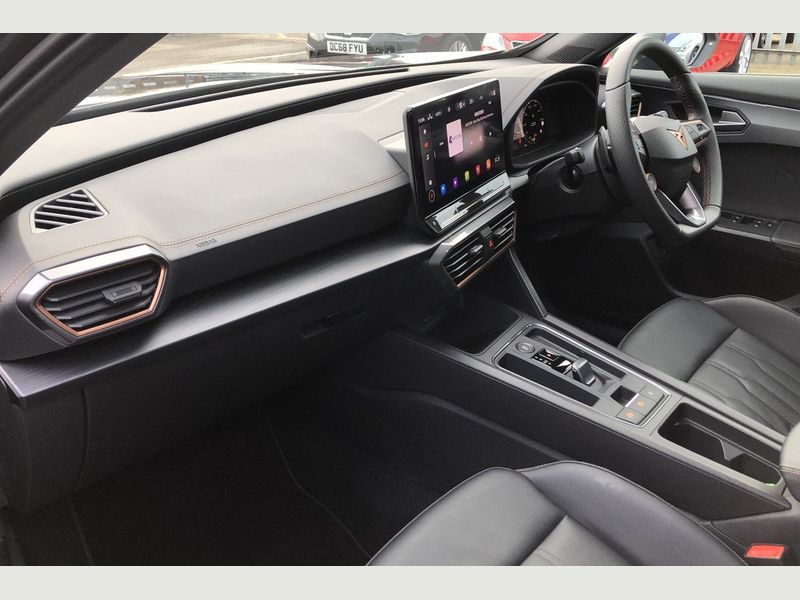 We found the Formentor to be a sportier Troc R, it has the power and can put it down but it grips the road like a hatchback rather than the higher up crossover that it is. We’ve not had a chance to really push it because a) the car isn’t ours, b) the weather has been crap, c) we’ve only been able to drive it on public roads.

Essentially if you like driving your Golf R but need more room, your Leon but want more traction then you’ll likely love the Formentor, especially since you can have the seat position lower than you expect.

What the Pros have said

In terms of bang for buck, we think the Cupra Formentor is a lot of car for the money, as standard the VZ2 comes with dynamic chassis control (DCC) and heated seats and steering wheel as standard. The MK8 Golf R doesn’t even get heated seats as standard.

As well as the 2.0 EA888 the Formentor is also available in a 1.5petrol engine available and soon a 240bhp hybrid variant coming out in the very near future. Naturally, we think most of our clients will pick up the 310 variant, but we think the hybrid will be a decent buy for a lot of people too.

In terms of price, the 310ps Formentor starts at £39,830 on the Cupra website, which we think is a lot of car for the money however it’s highly unlikely anyone is ever going to pay cash. There haven’t been many great PCP deals yet either, the one we did see had a £7000 deposit and was then £399 a month. For now, we’re keeping an eye on potential lease deals.

Research & Development on the Cupra Formentor

We’re fortunate enough that we’ve built fantastic relationships with both individuals and businesses who have already taken delivery of their Formentors. This has allowed us to already get the one in this article through the door for some initial research but means we’ve got a vehicle being loaded to us for 2 weeks very shortly, so we can take it apart and start looking at mods and improvements. Our range of Cupra Formentor parts will be available shortly.

Since the EA888 engine is tried and tested in a range of VAG products, and we’ve seen how easy and well they respond to tuning it’s only a matter of time until we start to see a Revo tune being able to take this from 310ps to circa 350ps-370ps.

Vagsport res delete for the Formentor

Since we’ve already had a Formentor in the shop development work has already begun and this one below has our latest VAGsport res delete installed on it. Let us know what you think.

After months of rumours online, and some videos too of a Formentor going around the Nürburgring with Audi’s flagship 2.5l engine from the RS3 & TTRS. Cupra has officially announced that they are releasing a Cupra Formentor with the 2.5l Daza engine.

Are Progressive Parts going to get a Formentor?

We’re currently weighing up our next project car after having taken an 8V S3 to over 500bhp, and the Cupra Formentor is definitely one of the options, giving us more practicality as a crossover with decent boot space and excitingly, something completely new to try.

We’re not making a decision anytime soon though, given how many competitors the Formentor has especially in the shape of the many 2.0-litre petrol competitors in VAG (Golf R, S3 and even the Cupra Leon), plus if the rumour of the Formentor getting the DAZA engine is true we’d be kicking ourselves for going for the EA888.

There is also the upcoming RS3 which is expected to be in showrooms in November 2021 so that’s something we’re also considering.