Due to COVID-19 we are experiencing delays answering support queries with staff shortages in all departments, we thank you for your understanding. Dismiss 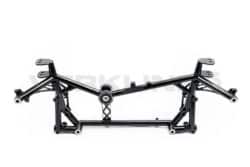 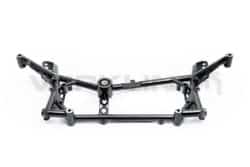 Due to import & material shortages at our partners, delays in getting parts to our valued customers may occur. Our team will contact you directly if an extended delay are unavoidable.
Alternatively please contact our team for more accurate information and timescales... Thank you.

Collect 1016 Points
Purchasing this product will earn you 1016 loyalty points worth £10.16.
Fitting Services
Our Manchester based workshop is here to help. View Prices
SKU: WAS-550 Category: Suspension Accessories PP-PC-BK-XL

After long CAD development based on 3D scan of OEM subframe, tested with CAD FEA (Finite element method) and road going tests you can now buy brand subframe for front of your Audi/VW/SEAT/Skoda cars based on PQ35 platform. List of cars bellow.

Using same T45 tubing as in WRC cars, our subframes provide increased stiffness and mass reduction. All factory parts bolt up to this unit, no other modifications are necessary.

Subframe now is made for both LHD and RHD cars

T45 is a very unique seamless carbon based steel tube that has been used in many applications in different industries. It is stronger than Co-Mo 4130 tubing that also used in motorsport. It is widely used in the aerospace sector in equipment such as pilot’s seats and crew’s seats due to the materials ability to withstand high G forces without snapping or splitting. This material is a Carbon Manganese based and conforms to the full Aerospace Specification laid down by British Standards.

Notice: Sold for off road, track and racing applications only. Installation of this product will introduce some additional NVH (noise, vibration, and harshness) transfer into the cabin. We strongly advice to mount the subframe in qualified and experienced workshop that would know what are doing.

Must use newer Gen3 steering rack There are no reviews yet.

Please note, this information is a combination of supplier provided compatibility data and our workshop expertise. While every effort has been made to ensure the accuracy of this information Progressive Parts Ltd are not liable for abnormalities or inaccurate data. Customers are wholly responsible for checking fitment for their vehicle. More information is available from our Terms & Conditions